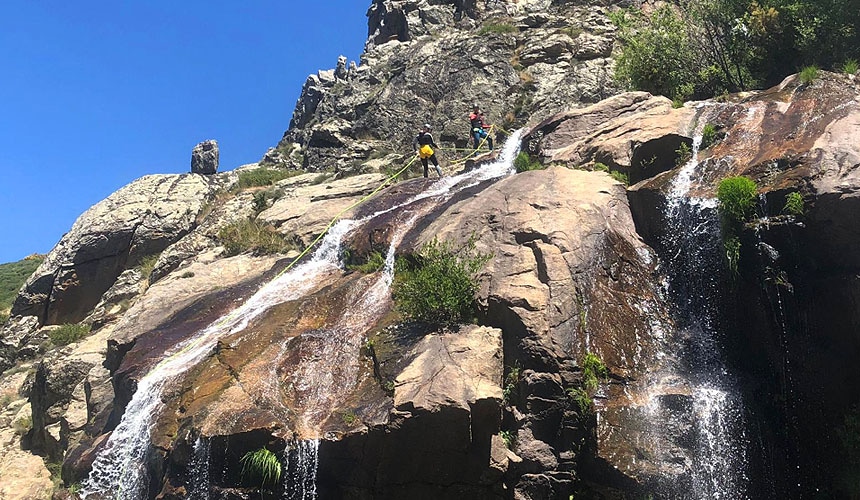 Canyoning Grades used in Spain. Learn How to grade a canyoning route.

Canyoning (“canyoneering” in USA or “barranquismo” in Spanish) is the activity of going through canyons using a variety of techniques including walking, scrambling, jumping, abseiling (rappelling), and swimming. Canyons that are ideal for canyoning are often cut into the bedrock stone, forming narrow gorges with numerous drops, beautifully sculpted walls, and sometimes spectacular waterfalls. Most canyons are cut into limestone, sandstone, granite or basalt. Canyons can be very easy or extremely difficult. A wide variety of canyoning routes are found throughout Spain, and canyoning adventures are enjoyed by people of all ages and skill levels.

In Spain we use the french grading system for Canyoning activities and routes.

The gradings here assume the following;

The letter ‘v’ (for vertical difficulty) followed by a number from 1 to 7.

The letter ‘a’ (for aquatic or water difficulty) followed by a number from 1 to 7.

The current difficulty numbers only reach 7, but more difficult canyons in the future could require higher numbers.

A roman numeral which indicates the commitment and duration of the canyon. I to VI or greater.

An optional star system indicates the quality/beauty/fun factor of a canyon.  0 stars through to 4 stars.

Always practice Leave No Trace ethics on your hikes and adventures. Be aware of local regulations and don’t damage natural parks and wilderness.