Learn How to Build an Igloo.

When we see the image of an igloo we usually think of the Arctic, the North Pole and the Inuit (the word “Eskimo”, in English and in French “Eskimaux”, has fallen into disuse in Canada because it is considered derogatory) but the real thing is that you do not have to travel to these latitudes to build an igloo that can shelter you from the cold weather outside.

If we carve the snow in the form of bricks we will approach the mental image that we all have of the igloo, but without getting to that, we can also protect ourselves by building snow caves or snow trenches, either by taking advantage of rocks and trees or only with snow. To choose the best type of shelter, everything depends on the state and conditions of the snow itself, as well as the urgency we have to build it to avoid exposure to the weather and survive. 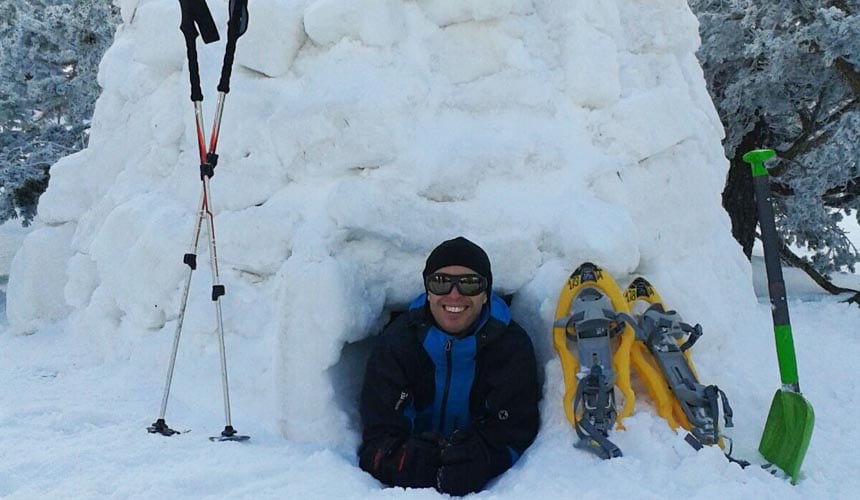 Next we will explain the advantages and how to build them.

Although outside the temperature drops below zero or even reaches -10 degrees or more, inside an igloo or snow cave can be maintained at 0 degrees and even more. That makes it a very safe place to avoid hypothermia, frostbite and shelter from the wind. If we get it to be minimally well built, the human warmth will maintain the temperature and, in addition, we can make it go up some more with the help of some point of heat, however small, such as a candle or lighter. But, attention !: you have to know how to use each of these tools and / or resources well or not only will we not be able to isolate ourselves from the cold, but we will be able to melt the snow on our heads or, even worse, intoxicate ourselves with smoke or monoxide of carbon. 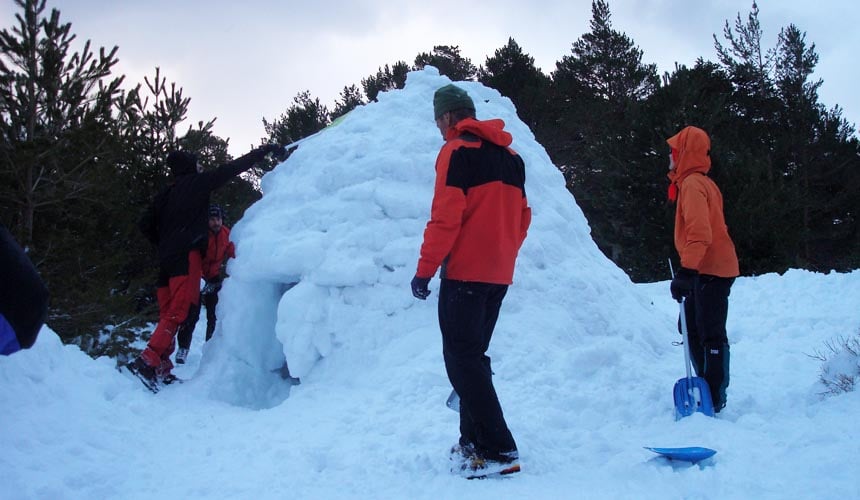 With regard to construction, the first and fundamental is to choose the right place, both at the level of orientation and inclination, and keep in mind the direction of the prevailing wind. Also we will check f we are in a place frequented by wild animals or there are natural elements that can protect us or, on the contrary, may put us in danger. For example, a wooded area can protect us from strong winds, but the woeght of ice or snow on the trees could break the branches and become a potential hazard.

Once checked the place chosen is as safe as possible, we must choose the system that we will use, depending on the type of snow that exists at that time and our tools. It will be difficult to carve bricks of snow if there is fresh or powered snow or if we do not have shovels and saws; or dig in the case of a snow cave it will be almost impossible if we do not have a shovel.

To make an igloo, the snow must be very compact, so if this is not the case, it will have to be stepped on and compact a lot earlier. The blocks that we cut should be as uniform as possible (approximate measurements of 30cmx30cmx40m per block are recommended). They are cut with the saw first and they are removed with the shovel later, trying to keep it in one piece. 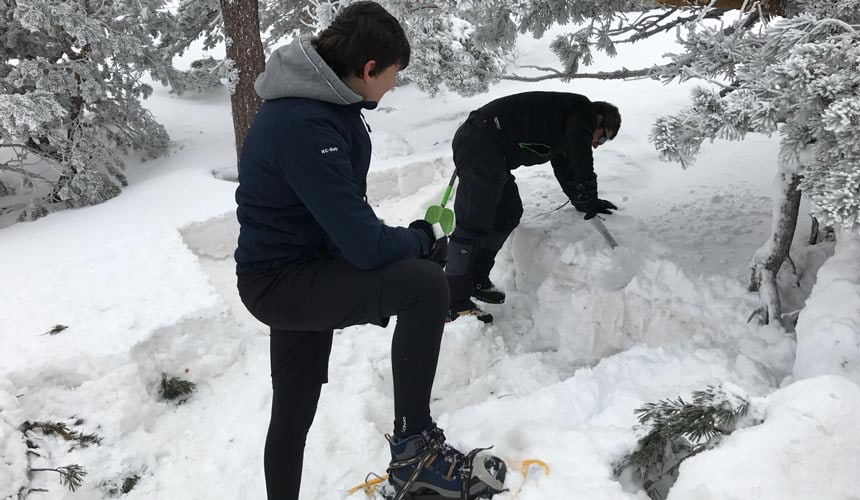 On the floor draw a semicircle will be the base of the igloo. The diameter of the semicircle will vary depending on whether we want a single person, two, or more. For four, for example, it is usually from a diameter equal to the height of a person (170-175cm or so). The first two rounds must be very stable, and from the 3rd we will put the blocks a little bit more inwards to form the spherical dome. The most practical thing is that one person is working inside and the others are outside to make sure that the construction is stable both inside and outside. 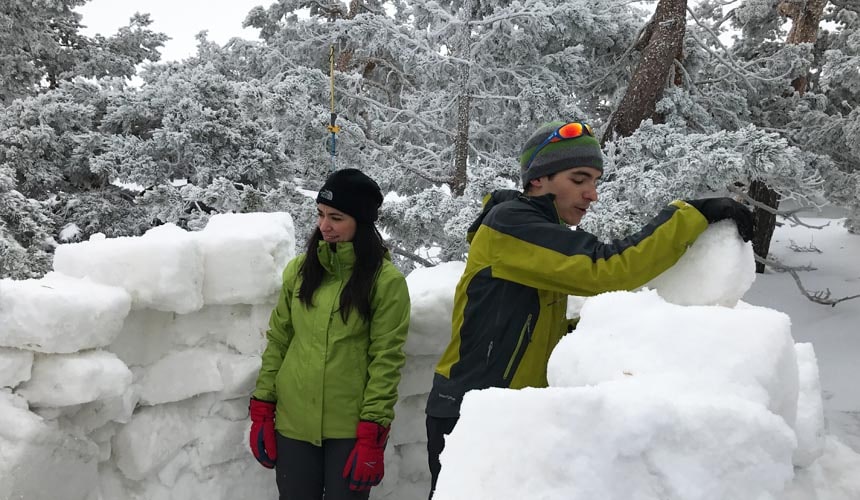 The outsiders will reinforce the fissures that remain between the blocks with layers of extra snow. The last block, the one that closes the whole igloo above, will have to be cut to size. Inside we will plug the cracks and polish it as best as possible. It is advisable to make a fine hole in the ceiling with a cane so that the heat does not melt the interior and we have enough fresh air to breathe. 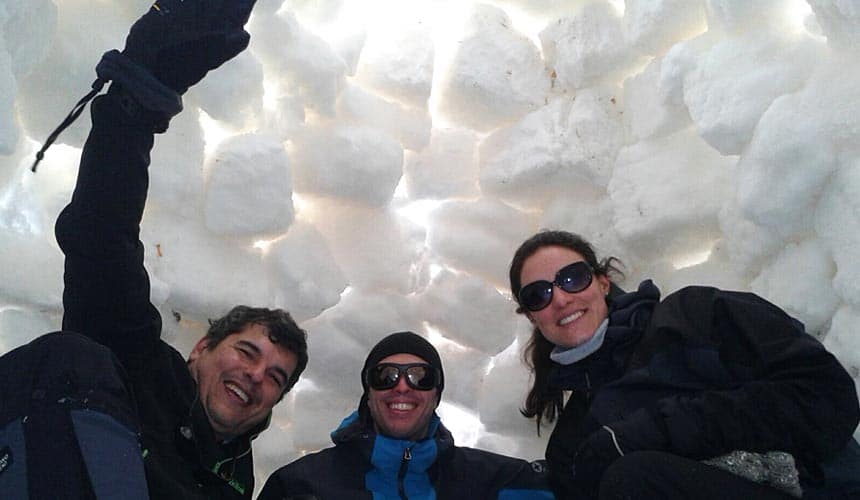 A snow cave is a shelter constructed in snow by certain animals in the wild, human mountain climbers, winter recreational enthusiasts, and winter survivalists. It has thermal properties similar to an igloo and is particularly effective at providing protection from wind as well as low temperatures. A properly made snow cave can be 0 °C (32 °F) or warmer inside, even when outside temperatures are −40 °C (−40 °F).[1][2]

A snow cave is constructed by excavating snow so that the tunnel entrance is below the main space to retain warm air. Construction is simplified by building it on a steep slope and digging slightly upwards and horizontally into the slope. The roof is domed to prevent dripping on the occupants. Adequate snow depth, free of rocks and ice, is needed—generally a depth of 4 to 5 ft (1.2 to 1.5 m) is sufficient. Another kind of snow cave is the quinzhee, which is constructed of snow rather than created by digging a hole out of (or displacing) snow. 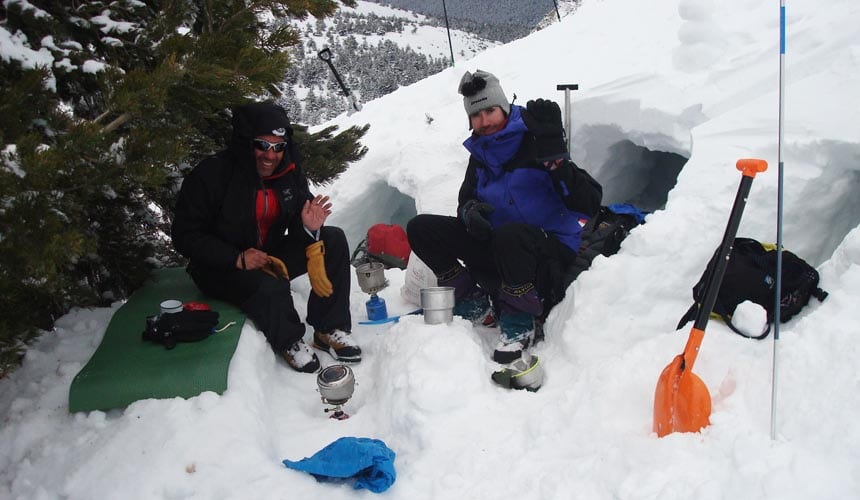 If we want to spend the night there or spend a few hours sitting, it is essential to isolate the floor in some way. The ideal would be to use our mats and tarps. If we do not have a tarp, we can isolate the soil with dry leaves, pine branches and spruce. If we work with them we will be able to make a kind of dry and confortable bed. We must also avoid getting inside the igloos and snow caves with boots or wet clothes so when we lie down or sit down we can keep dry inside.

Regardless of construction type, the snow must be consolidated so that it retains its structure. The walls and roof should be at least 1 ft (0.30 m) thick. A small pit may be dug deeper into one part of the cave floor to provide a place for the coldest air to gather, away from the occupant(s), and the entrance may be partially blocked with chunks of snow to deflect wind and retain heat, although it is vital to prevent drifting snow from completely plugging the rest of the entrance in order to maintain a constant air supply. Some prefer to place a ski pole or a ski up from the cave out through the roof or side wall. This can provide an emergency air hole should the main entrance become blocked.

It is possible to sleep several consecutive nights in a snow cave, but care must be taken since a slight ice surface may develop on the inside of the cave from moisture in the exhaled air of the inhabitants. This is thought to result in reduced air ventilation through the snow cave walls and roof, and thus increase risk of suffocation. As a precaution it is common to scrape off a thin layer from the inside of the cave ceiling each day spent in the cave.

A narrow entrance tunnel, a little wider than the occupants of the cave, leads into the main chamber which consists of a flat area, perhaps with elevated sleeping platform(s), also excavated from snow. 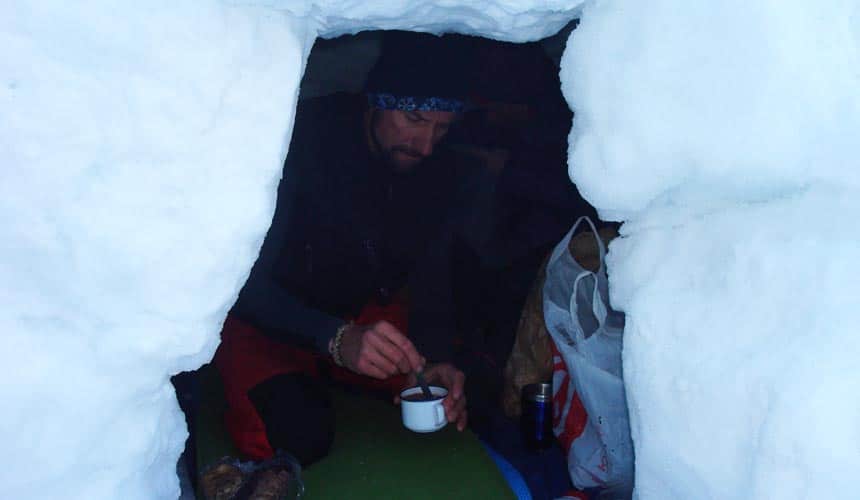 Most sources agree that using tools such as a shovel and ice axe are vital; digging by hand is for emergencies only. Digging a snow cave can be very physically demanding. In perfect conditions with good snow, digging a snow cave for 2 or 3 persons often takes 3 to 4 hours to complete. It can be useful to take turns in a group of climbers such that each person works in 5 minute intervals inside the cave, while the others help remove excess snow outside the cave and prepare food and warm liquids for the group.

It is important to remember that, inside the igloo or refuge of snow, the sounds are attenuated and you will not listen well to everything that happens outside, including if you are waiting for help and you want to recognize the sound of a car, helicopter or steps and voices of people. 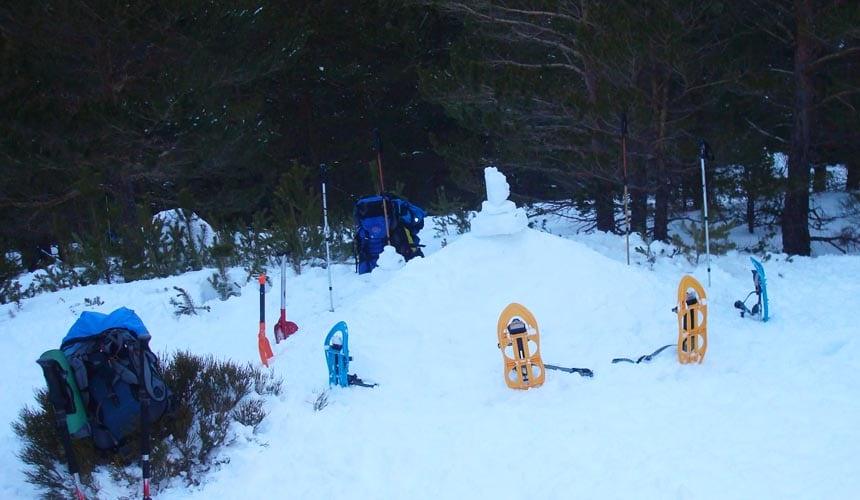 There are many other solutions to look for shelter in the snow, some simpler than making igloos and caves, like a simple trench that protects us from wind, blizzard and low temperatures. If it is snowing and we do not want to get wet, we will have to cover them with tarpaulins and empty them from the snow every so often so they do not sink.

All these refuges of fortune that make the snow an ally, must be practiced first, and even its domain, with professional mountain instructors and guides, because if they are not well designed and made they will not be able to protect us from hypothermia and even, in some cases , they can collapse on our heads.

Building a simple snow cave is an exercise suitable for children, as playful or more than making a snowman, and that will instill their first notions of survival. 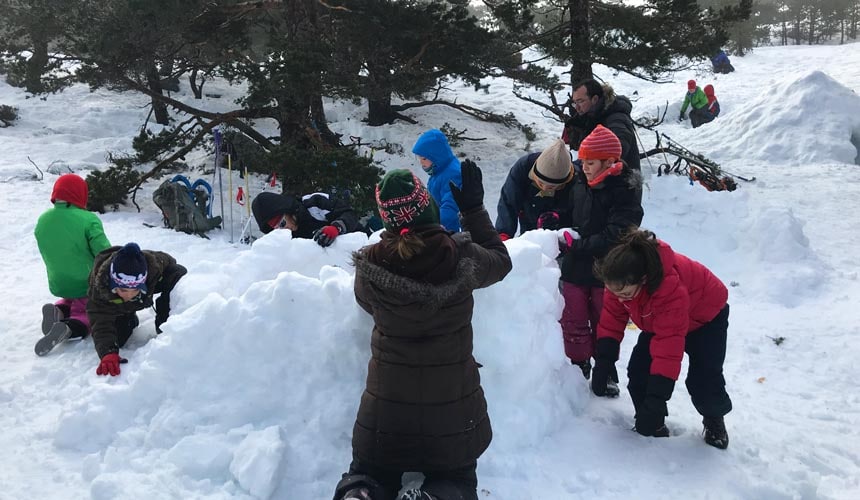 For adults who practice snow sports in winter mountains such as mountaineering, snowshoeing, cross-country and mountain skiing or expeditions with pulkas, it is an essential exercise in teamwork, which can be very useful in situations in which it throws us fog, cold or night or there is an accident no matter how small it is that forces us to wait in the snow until they come to rescue us. 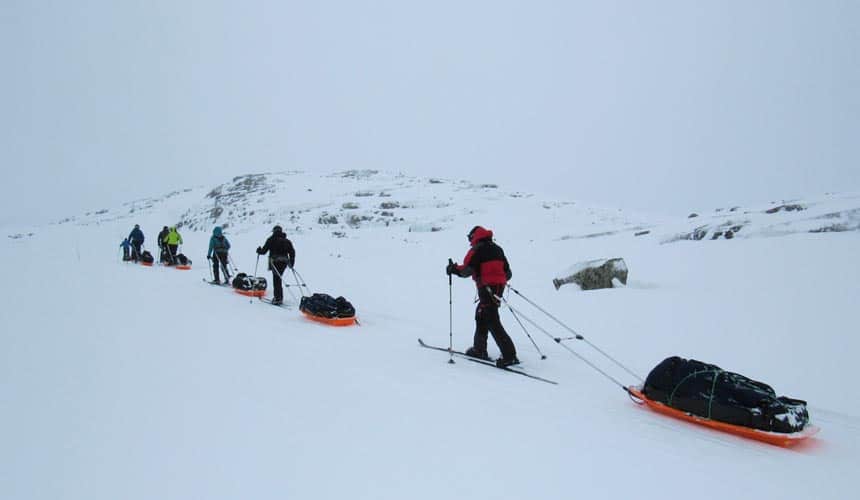 Build an Igloo. Winter Hike in Madrid. Snowshoeing in Madrid with Dreampeaks.

As the Inuit say in their language: Tavvauvusi . Goodbye everyone!

Always practice Leave No Trace ethics on your hikes and adventures. Be aware of local regulations and don’t damage natural parks and wilderness.